The Bank of England has raised the base rate of interest to 1% – the fourth consecutive increase as it continues to move against surging inflation – despite issuing a warning about a recession ahead.

The Bank forecast that the UK economy will shrink later this year in the face of double-digit inflation and an unprecedented squeeze on household incomes.

In its first forecast since the Russian invasion of Ukraine, the Bank said it now expected the energy price crunch to leave a lasting scar, pushing up unemployment and contributing to weak or negative growth throughout 2023.

Despite this, the Bank’s monetary policy committee (MPC) also voted to increase interest rates by a quarter percentage point to 1% – the highest level for borrowing costs since 2009.

Three of the nine MPC members voted for an even sharper increase of half a percentage point, and the Bank said “most members of the committee judged that some degree of further tightening in monetary policy might still be appropriate in the coming months”.

According to the Bank, real household disposable income and real post-tax labour income – two measures of the impact on families – will both fall sharply this year as those energy price rises feed through into the system.

The Bank slashed its forecast for gross domestic product (GDP) growth next year from 1.25% to -0.25% – the closest it ever tends to come to forecasting a recession.

Please use Chrome browser for a more accessible video player

The technical definition of a recession is typically two successive quarters of contraction. The Bank’s projections imply a sharp fall of nearly 1% in the final quarter of this year, as energy bills rise in line with the latest Ofgem price cap, followed by weak GDP, for most of 2023 and another quarter of contraction that autumn.

It said that unemployment would also begin to climb, with the rate rising to 5.5% by the middle of 2025.

Read more: How the latest interest rate rise affects your finances – and what you should do about it

But perhaps most striking of all its forecasts is that inflation, as measured by the consumer price index, would rise to 10.25% towards the end of this year – nearly double its previous forecast of 5.75%.

That level of inflation would be the highest the UK has faced in four decades, since the early 1980s, when Britain was at the tail-end of a long period of stagflation – high inflation and low growth.

It is easily the highest inflation forecast since the Bank was granted independence to set monetary policy in 1997.

Andrew Bailey, the Bank’s governor, told Sky News: “It’s extremely uncomfortable, I don’t want to make any bones about it.

“But the fact of the matter is we’re being struck by historically large shocks. I mean, let’s face it, who of us thought there would be a war in Europe of the sort that we’re seeing? It’s terrible.”

“We think most of the work to bring inflation down will be done by, unfortunately, the severity and scale of this shock to real incomes, which I’m afraid to say has gotten worse in the last three months since we last produced a report because, obviously, of the impact of the terrible events in Ukraine,” he said.

In a news conference, he said total real household disposable income is projected to fall by 1.75% in 2022 which – apart from 2011 – will be the largest contraction since comparable records began in 1964.

“I recognise the hardship this will cause for many people in the UK, particularly those on the lowest incomes, often with little or no savings, that were hit hardest by increases in the prices of basic necessities like food and energy,” he said.

The Bank warned that its forecasts are predicated on what traders and investors in the market expect them to do with interest rates – a sharp increase to 3% by the middle of next year. Only a few economists expect that to happen.

So the economic crunch may be somewhat less severe than its headline figures. That said, even leaving borrowing costs where they are would not prevent a contraction at the end of this year.

Please use Chrome browser for a more accessible video player 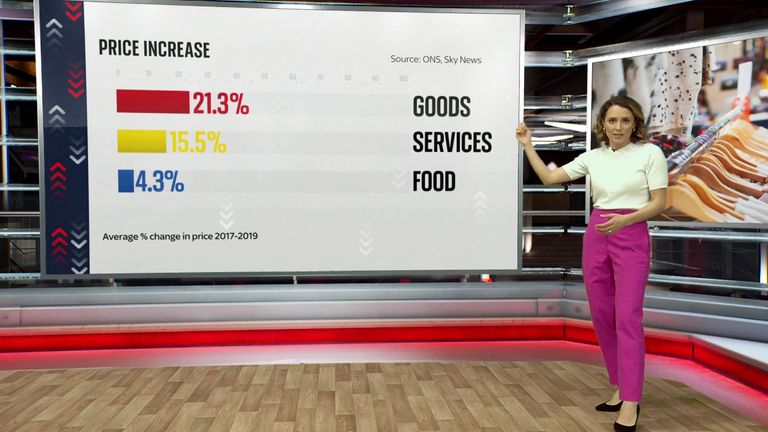 Analysis: Where is inflation hitting?

Financial market reaction to the Bank’s voting and latest predictions saw the pound fall by more than a cent against both the dollar and the euro. Sterling was almost two cents down on the day versus the US currency at $1.24.

The Bank also said that with interest rates now having reached 1%, it would begin researching when and how to begin reversing quantitative easing – the programme under which it has created money to buy hundreds of billions of bonds in an effort to bolster the economy since the financial crisis.